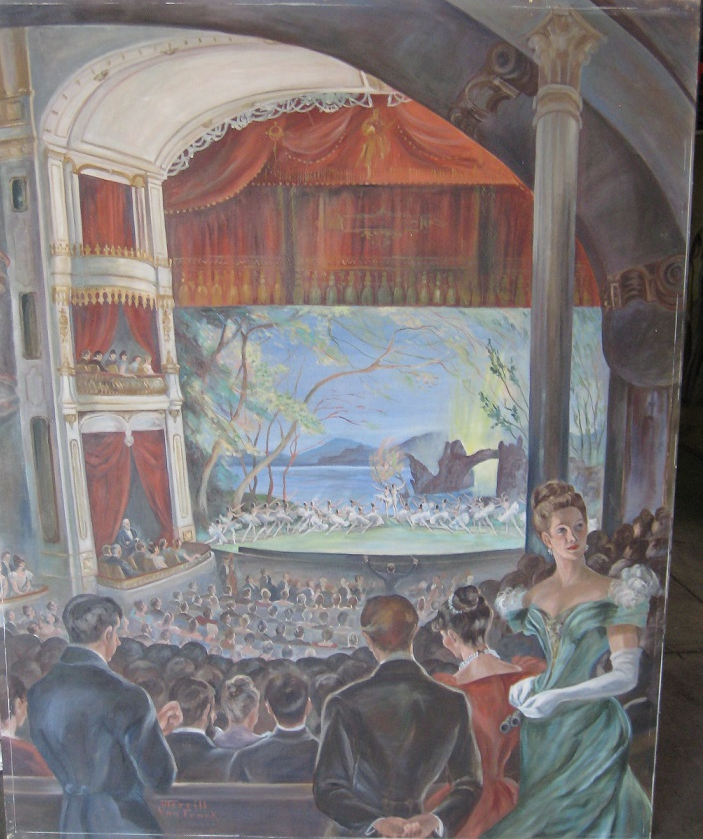 This month in our ArtsMuse newsletter, we’re featuring “Salt Lake Theatre,” a work from 1947 by E. Merrill Van Frank, donated by Sheila and Megan Van Frank. This is part of a collection of murals created by Van Frank for Auerbach’s Department Store. The murals were displayed in their downtown Salt Lake retail space in celebration of Utah’s 1947 centennial of LDS Church migration into the Salt Lake Valley. This piece depicts an audience enjoying a performance of “Swan Lake” at the Salt Lake Theatre circa 1890.

Here’s more about the work and the artist from Megan Van Frank:

“E. Merrill Van Frank was my father’s mother. My grandmother was an amazing woman who defied expectations in the early 1920s by going to New York to follow her dream of becoming a working artist. It was the start of a long career; she was a fashion illustrator, fashion manager for two of Utah’s biggest department stores (Auerbach’s and ZCMI), an interior designer, art teacher, and a serious painter. The Centennial Murals that mark a state milestone also represent some complex layers of place-making and social history. Our family has always considered them to be a real Utah treasure and are pleased they’ve found a proper home in the state’s public collection.

The Salt Lake Theatre work you’ve chosen to highlight has, at its center, a woman in green modeled on Nancy Finch (my grandmother’s best friend), who was a patron of the arts in Utah, serving on the boards of the symphony and other organizations. The Finch Lane Gallery, and Finch Lane on which it sits in Reservoir Park, are named for her father, who served on the Salt Lake City Council and advocated for the park.”

We’re delighted to have works by this important Utah artist in our collection.