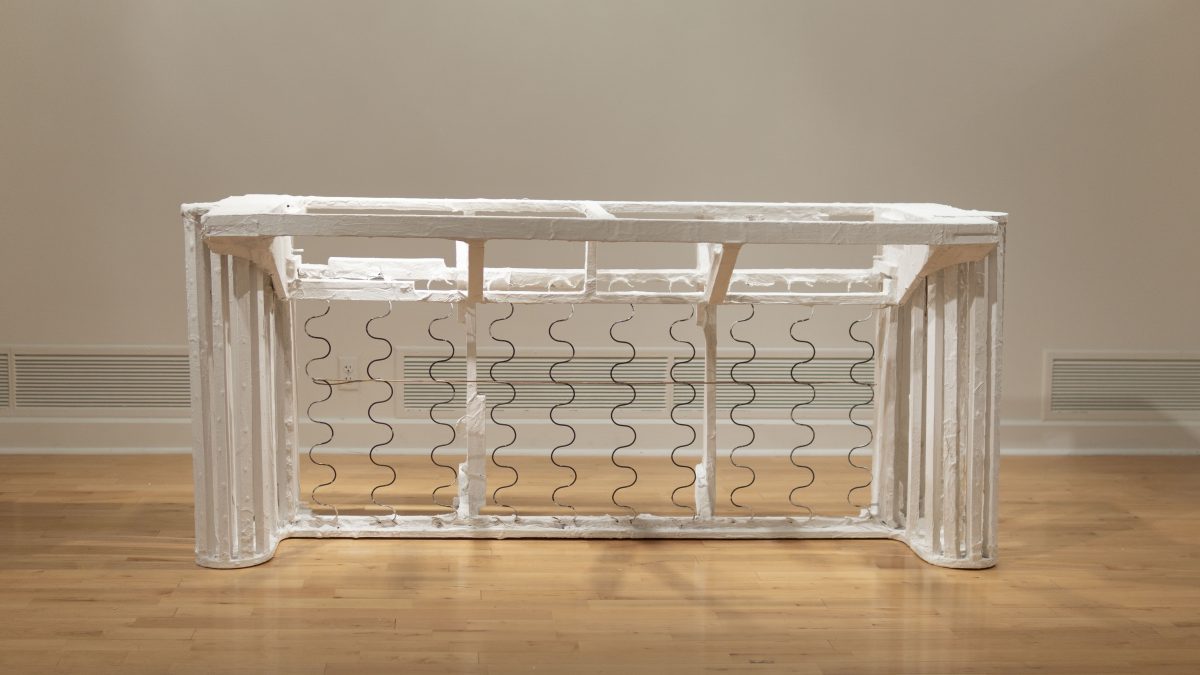 Comforting Discomfort presents sculptural, photographic, and multimedia work pertaining to assuaging distress and discomfiture. In a world of abrupt shifts in borders, ideologies, and human identities, these forms attempt to alleviate distress and scrutinize (well)being. Dalila Sanabria and Fiona Matisse Barney create works that stem from personal conflicts and an inquiry in failing to fully come to a comforting resolution. In this exhibition, Sanabria and Barney construct a variety of objects and unlikely creatures that explore notions, including the tensions, of assurance and comfort.

In conceptualizing discomfort, Dalila Sanabria creates wrapped, distorted work that embodies physical displacement in relation to memory and material. Using plaster, cardboard, drywall and found furniture, Sanabria constructs objects that memorialize the domestic space. Although somewhat minimalist in form, her sculptures and wall pieces are anti-archival in nature, falling apart similarly to how paint can chip off a wall. The process of accumulation is significant as well; torn, cut, and withered-away bits of material are pasted on top of each other into a precarious whole. The concept of a home and changed circumstances mirror her interest in the relationship between preservation and entropy.

Fiona Matisse Barney’s art consists of quirky snippets of narratives that explore ludic notions of comfort. Barney relishes in tales of the insignificant. Her work amplifies the forgotten, invisible, and the overlooked with a futile attempt to gain acceptance and to feel comforted in various situations. Barney is interested in the pathetic, or the supposedly insignificant, like fallen branches of a tree, the production of missing clouds in the sky, or attending to the ants that live in the playgrounds and city streets where she was raised as a child. She is encouraged and provoked artistically by iterative attempts to humanize various behaviors, actions, and forms. Her images point toward quiet and sometimes melancholic, but often humorous, imagery highlighting the subtle powers of the ability to imagine a unique sense of comfort. Barney calls this process comfort(abilities), or the able-ing of an idea of comfort.